WELCOME TO THE OFFICIAL HOME PAGE OF: PRINCE RAVI RAJA

"A touch of Bollywood Royalty"

“Prince Ravi Raja” a monarch whose kingdom has fallen on hard times, has arrived in Bollywood.

Under his mothers strict orders he has to find a rich wife, make it big as a movie star & save his kingdom from ruin.

Potential wives are auditioned but before being deemed suitable for the position a long list of criteria that must be fulfilled.

Skills like the ability to balance a rose on the tip of her nose, tie down a camel & be able to do a few contortion poses from the “Karma Sutra”

(put one foot in the mouth whilst standing on the other, that sort of thing..).

Together with other such skills that are skillfully demonstrated by the prince himself.

at anybody Ravi thinks may give him his big break in the movies. 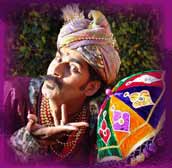 Prince Ravi Raja has also been a VIP guest at many a community festival like:

&  the most recent being hosting the Indian Film Festival event in Harmony Square Dandenong & many many more..

To experience Prince Ravi Rajas Royal presence at your next function, please enlist the services of a carrier pigeon,