WELCOME TO THE OFFICIAL HOME PAGE OF SIR. RAMMY LIVINGSTON

Rammy goes back, waaay back! He’s got pedigree!

“Sir. Rammy Livingston” has even mastered the language of the Jungle Drums to communicate with the natives. Sir Rammy Livingston is also an expert in fishing on dry land, with his specialized fishing rig which he encourages audience members to have a go, & aptly demonstrates his unique technique. Sir Rammy is always on the hunt for game, any game be it on four legs or two!

Sir Rammy Livingston is an ‘A’ list guest for any occasion, but ideally suited for “African”, “Adventure”, “Eco”, “Jungle”, “Pets” or “Outdoor” theme events.

Sir Rammy Livingston has been seen at public events like the Ballaratt – Begonia Festival, The Oakleigh festival, Frankston Pets Day Out, Apollo bay Music festival & at corporate events for clients like Nandos  & Arup Australia just to name a few..

Sir Rammy Livingston does not in any way endorse hunting in the traditional sense. He’s all about using a camera not a gun.

To have Sir Rammy Livingston at you next event send a message on the jungle drums, the short wave radio, telex, email or just pick up the closest phone & call now! 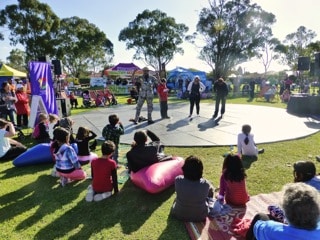